I've recently been working on a game called Balloon Box. It's a 2D desktop platformer in which the player controls a cardboard box, navigates through an abandoned factory which is known for its pneumatic material transport system. (When I implement it) you will have to avoid cardboard-dissolving acid and knife racks, and collect balloons and batteries. Read the story on Github.

The source code is available on Github. It's written in Java, using LibGDX and Box2D, via Maven (so the code is nested rather deeply...). Also, I'm using a library I developed called the Live Constant Tweaker (incredibly useful for tweaking physics constants) that only exists in my local Maven repo, so you'll have to get it to compile Balloon Box.

The latest build from Jenkins is available here.

A video of wip gameplay:

Some screenshots from yesterday: 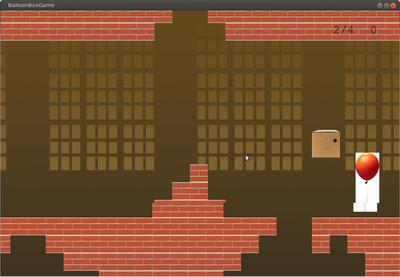 Collecting a balloon - screenshot seems to have caught some tearing artifacts

Eventually I'll work out a way to make it build on other machines, and hopefully set up some kind of nightly build.